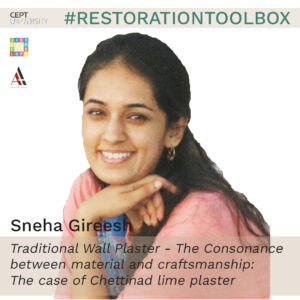 Architectural conservation is necessarily a blend of material, context and workmanship. A brilliant example of the same is that of Chettinad lime plaster which is researched and studied in detail in this project to emphasize on the need for a system that could help in the conservation of the material and the skill as both of them go hand in hand. They are interdependent in nature and one cannot survive without the other.
The use of lime plaster has deteriorated since the industrial revolution with the introduction of cement plaster which is much easier to execute and also set. However, the outlook that this research promotes is that lime plaster as a material is sustainable in aspects beyond those of environmental concerns. Lime plastering is a skill that happens to support the livelihoods of several craftsmen and their communities. Thus, sustainability in this case has a social and economical trait to it as well.
The project aims to provide a user-friendly open-source document, which can be used as a reference to preserve, restore, and reuse traditional wall plasters; specifically Chettinad lime plaster of 19th and 20th-century buildings in this case.
It focuses on trying to allow its user to put the material into practical use by providing all the information about the material starting from its historical perspective, possible defects, and restoration techniques based on principles to information about access to raw material and craftsman skill resources for execution.
The research delves into understanding lime plaster as a material and a skill and how it can be a driver for social sustainability. Chettinad is a region of wealth and affluence and this is understood on basis of history. This helps in further understanding the architecture of the place and eventually helps in establishing the significance of Chettinad lime plaster. This lime plaster has a specific name to it to establish that it has a particular way of production and execution. The toolbox aims to behave like a system to help conserve the material by taking into consideration the requirements of on-ground preservation techniques and principles.
Chettinad lime plaster as a material has the potential to go beyond the name of the region attached to it. While the name holds huge importance to the material and skill the name need not limit it to the region it was discovered in. Thus the ideas of authenticity and adaptability are analysed in-depth to eventually arrive at a way forward.
Thus, the project attempts to make Chettinad lime plaster, socially sustainable by trying to revive the craftsmanship behind it by giving the user enough reason and information to put it in use wherever they require to.