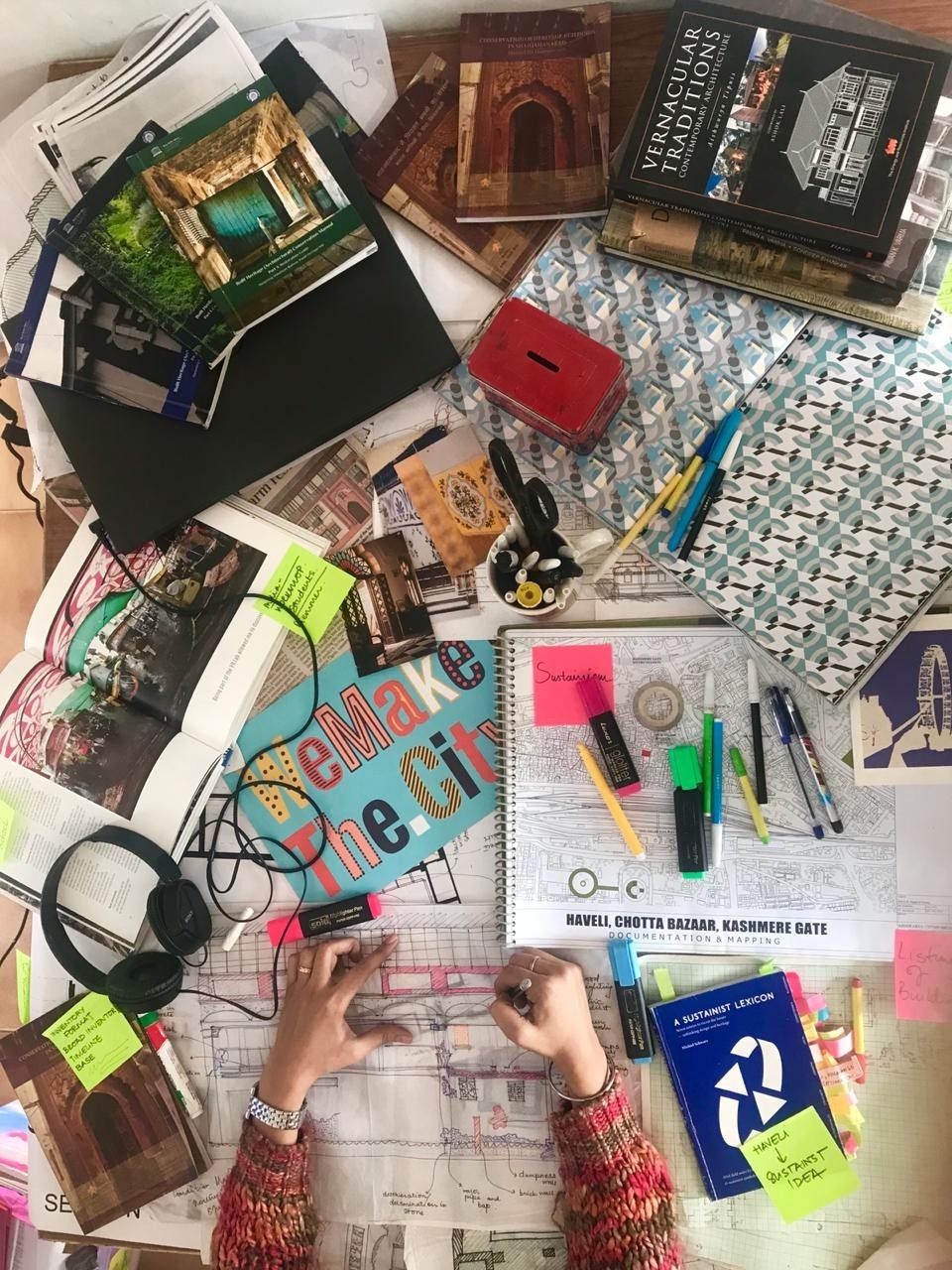 Necessity is the mother of invention they say, Indian cities are symptomatic of how innovation can lead to create solutions with limited resources. Jugaadopolis (an initiative of Aishwarya Tipnis Architects) is a people led movement to make sense of the city.

A brainchild of Aishwarya Tipnis and Hinna Devi Singh, the programme is an innovative medium to explore, understand and appreciate heritage of our cities and cultures in all their forms and find creative ways to make it all relevant to the new generation.

Adopting the lens of Sustainist Design, as a cross over between heritage and placemaking, we see heritage making as a process of social design that helps communities collectively shape their identities. Jugaadopolis builds on the idea of Sustainism on the idea of connectedness and relationships that people build with each other and their physical spaces. Through our venture of Jugaadopolis, we have ventured into demystifying the various layers that make the city of Old Delhi. Jugaad epitomises the innovation and resilience to find frugal low cost solutions to solve a problem, we view an Indian city as a Jugaadopolis, a city that is built on resilience and continue to find innovative ways of evolving to remain relevant. There are many lessons in how this city functions, its intangible shared heritage that binds the city and its communities together. Through our student led workshops we have worked at capturing and documenting this sense of place through different mediums, often engaging the local community in the process as a co-collaborator.

How we co-founded Jugaadopolis is a story worth sharing

Our coming together to do this together was very surprising for most people. Professionally while Aishwarya is the domain specialist with heritage conservation and her work has been about restoration, design and education, our co-founder Hinna has worked with different contexts, teaching in Switzerland and working with communities with design thinking and coming up with new innovative methodologies. Having known each other for 18 years, having studied architecture at the same university this would have been an ideal collaboration. They are similar in many ways and diametrically opposite in many others yet they have a lot in common. 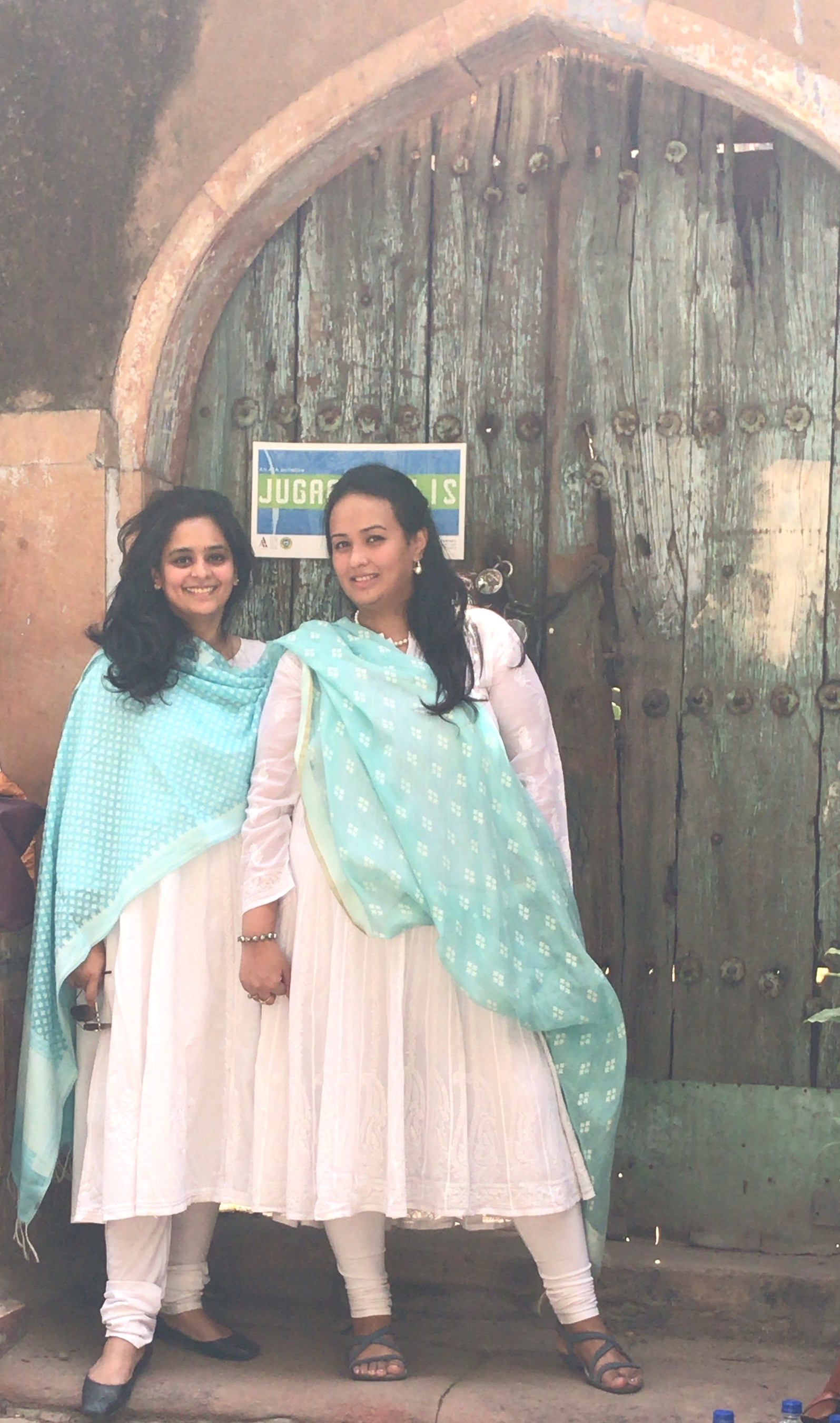 She is an alumna of the School of Planning and Architecture, New Delhi, India & School of Town & Country Planning, University of Dundee Scotland. Her deep understanding of the Indian context coupled with her training in Britain enables her to develop bespoke solutions that are both global in approach and apt in the local context. She has over a decade of experience in the field of architectural and urban conservation and has pioneered several urban conservation and building restoration projects in India. Aishwarya is the recipient of the highest civilian honour in the culture sector the insignia of Chevalier des Arts et des Lettre (Knight of the Arts and Letters), by the Government of France in 2018 for her outstanding commitment to the preservation of French Heritage in West Bengal. She is also the recipient of the UNESCO Award for Heritage Conservation in the Asia-Pacific Region (Award of Merit: Mahidpur Fort & Honourable Mention for  Doon School, Dehradun) in 2016. She is the recipient of the Commonwealth Professional Fellowship 2011, Bonjour India Embassy of France Travel Fellowship 2010, Scottish International Scholarship 2006, as well as the IHBC Gus Austley Award 2007, Architectural Heritage Society of Scotland Award 2007. She has authored a book on "Vernacular Traditions: Contemporary Architecture" as well as multiple articles on heritage conservation in leading dailies. She is currently a visiting faculty to Department of Urban Design at the School of Planning & Architecture New Delhi.

Hinna is an interdisciplinary practitioner, an alumna of the School of Planning and Architecture, New Delhi, India & the Joint Master Architecture, Bern University of Applied Sciences, Burgdorf, Switzerland. She continued her mainstream architectural design practice while also being the co-founder at Jugaadopolis. Beginning as a teenager in the Indian Independent Rock Industry she dabbled in artist management, production, event organization, shoots, music recording, merchandising while being a musician herself proficient in western and Indian music, vocals as well as instrumental. She is also a trained classical dancer in Bharatanatyam, Manipuri and Kathak. Being from a mixed lineage of Manipuri and Punjabi Cultures, she is naturally artistically inclined and often creates paintings, sculptures and mixed media that have had a chance to be exhibited  on several occasions over the years. Having worked in varied fields over the years, she has developed a unique skill set that enables her to work on multidisciplinary projects.

Her experience in Europe, gave her ample opportunity to learn international practices in architecture, research, design thinking, writing and application of theory to practice, and helped in developing a diverse approach to content creation.

She was associated with NDTV as a regular guest architect at the start of her career as a practicing architect. She has also contributed articles to national dailies as well as international periodicals over the years.

Mrudula has a Masters in heritage studies from Vrije Universiteit, Amsterdam Netherlands with a background in English literature and political science.

Let us grow together

If you feel you have an idea that can be explored further and can help create an interactive platform of exchange, get in touch and we're sure we'll create magic together.