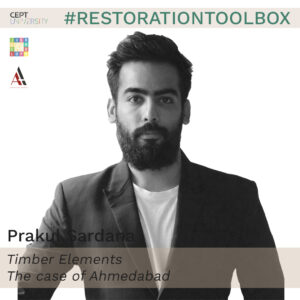 The timber’s significance as a natural and locally available building material before the industrial revolution is prevalent in the contemporary world. One can witness the timber structures standing firm to date. The reason for the popularity of timber until the 19th century over other construction materials was its strength along the axis, ability to get mould in the desired shape, and was readily available. It is a well-known fact that the carving of wood was practiced even by ancient tribes to decorate their weapons and domestic artifacts. Over the years, humans have excelled in wood carving skills until the Industrial Revolution, and the demand for timber construction declined.
In, Gujarat wood was preferred for construction (religious and domestic). It was easy to procure and carve. One of the primary reasons was timber being suited to Gujarat’s climatic conditions, which led to the development of traditional craft skills such as wood carving. Sultan Ahmedshah found the walled city of Ahmedabad in 1411 to relocate his old capital at Patan. Art and architecture flourished in the city after the reign of the independent sultanate came to an end. Over the years, Ahmedabad got its name for trading, and many travelers have commented about the city’s grandeur. The city was enclosed by a fort wall with 12 gates and was divided into chaklas. The dwellings of traditional house form, of the walled city, were packed closely and share the long walls.
Ahmedabad’s walled city was declared under criteria (ii) and (v) as a world heritage site by UNESCO in 2017. The unique features are its pol settlements and wood carvings on the houses’ timber facades. The absence of an appropriate framework/policies puts a heritage owner into the dilemma of investing the money in maintenance or new construction. These privately owned houses are vulnerable to unforeseen events if not maintained or repaired in time. The samples within Ahmedabad’s walled city have been selected to address the gap in traditional skills and materials amongst the heritage owners.
The research focuses on privately owned houses that are vulnerable to unforeseen events and in dire need of maintenance. These traditional houses are of extreme importance to Ahmedabad’s cultural heritage, but many of them are still undocumented, making it difficult to keep track of it. The majority of people in the walled city are reluctant to the idea of authorities to intervene as they are not allowed to make changes in the existing fabric for their benefit. From the private owner’s perspective, the repair costs for maintenance are expensive and not durable enough like contemporary new construction.