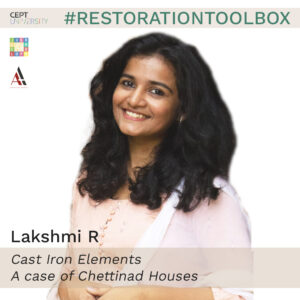 Technological advancement in building materials has led to a progress in construction methods and evolution of built forms. Cast iron, a product of industrialization was used widely for its properties like prototyping, mass production and creating identical designs. India imported cast iron and these elements are seen in many 19th and 20th century traditional houses and settlements in India, which were a resultant of trade relations during the British rule. But, with further advancement in steel technology, cast iron- that was once used as a decorative material showcasing columns, brackets, and grills, is currently limited to landscape and outdoor furniture. The historic cast iron used across various building typologies is facing a threat due to deterioration or replacement by other materials. The major reason for this is the lack of understanding of significance and knowledge on the ways to conserve them. The technical know-how and technological advancement in contemporary times has been restricted to non-architectural and non-decorative building elements.
The research attempts to build a relationship between what exists in the industry and what is needed from the conservation perspective especially in terms of techniques and resources. Through a pilot study of Chettinad houses/ mansions, it is attempted to understand various deterioration patterns and feasibility of ways to preserve, restore or reproduce. This culminates into the toolbox answering the questions of what, when and how to do. The scope of the study is limited to non-structural defects and visual observations based on rapid survey and telephonic/video conversations, due to restrictions imposed by the covid-19 pandemic.
The toolbox comprising of six sections is a linear guide where one step will lead to the next.
I. Introduction to Cast Iron – A brief introduction in to what is cast iron, how to identify and its manufacturing process.
II. Overarching Principles– These principles are the first step that need to be followed before doing any observations or interventions of any degree.
III. Identification and Prescription– The most important part that will guide one to identify the steps to be taken for observed defect.
IV. Treatment Procedures– From the previous stage the user can refer to this section for method to perform or carry out the prescribed steps and treatment methods through an illustrated step-by-step guide.
V. Maintenance Guidelines– Apart from treatment on arising of issues, maintenance of cast iron is equally important. This section guides the user to formulate their own maintenance plan.
VI. Directory of Resources– This directory of resources is in context of Chettinad region where contacts related to any prescribed process can be located.
On analysis, it was understood that the methodologies of treating cast iron building elements exist, but in scarcity. This puts forth an immediate need to orient the available techniques and resources towards the conservation discourse before a permanent loss/major shift takes place.
This framework is further envisaged as that which can be adopted, adapted, and applied in different contexts.